There is nothing mini about how much fun Mini A-kon was this year! There was an estimated 3, 200 people packed into the De 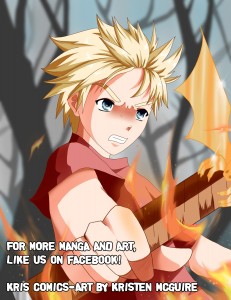 nton Public Library and I drew an estimated 40 people as anime characters. (Talk about your hand cramp!) We sold all but two of the “A Day in the Life of a Cat Girl” comics that we brought, but worry not because I will have more for sale at Ushicon in just TWO weeks!

The comics panel was an awesome combination of seven spectacular artists (including moi) and we had a great time answering everyone’s questions about the ins and outs of comic and art creating.

To wrap things up I was live on the radio with the Nerd Show Sunday night to talk about all of the cool things that happened at Mini A-kon. You can check out the broadcast on YouTube here.

For more manga, art, and convention news like us on Facebook under Kris Comics – Art by Kristen McGuire!

Here is our convention/ scheduled guest appearances for 2013 (so far ;-D):

We will see you at Ushicon! <3