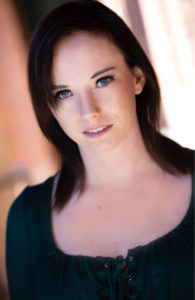 Kristen McGuire is a professional voice actor, ADR Director and Script Adapter. When it comes to voice work, Kristen has worked on over 200 different titles, and she is most well known for her work as Milim Nava in That Time I Got Reincarnated as a Slime, Isabel in Attack on Titan: No Regrets, Ruri in Dr. Stone, Tatami Nakagame and Tamashiro in My Hero Academia, Yu in Fire Force, Senko in The Helpful Fox Senko-san, Young Nora in RWBY, Hinano Kurahashi in Assassination Classroom, Yui in Bofuri, Cinnamon in Nekopara, Yume Minami in SSSS.DYNAZENON, and Yuuko (AKA Slug Girl) in Junji Ito: Collection. She has also provided voices for several video games, including Shiro in Tower of Fantasy, Yuka, Wenjing, Daisuke, and Mizusu in Genshin Impact, Lucia in Punishing: Gray Raven, Flora in Tiny Tina’s Wonderlands, Mother Fearest in Borderlands 3: Psycho Krieg and the Fantastic Fustercluck, Chibi Arachne, Discordia Lunar Moth, and Charbydis 2.0 in Smite, Fae and Etheldred in Battle Axe, and Sarah Ridley in Xeno Crisis, and many more!

As a script writer, she has adapted several titles for English, including but not limited to Cardcaptor Sakura: Clear Card, Love Live! Sunshine!, That Time I Got Reincarnated as a Slime, Highschool DXD Hero, The Helpful Fox Senko-san, Astra: Lost in Space, Wonder Egg Priority, as well as many others. Her ADR director credits include Citrus, Tsukigakirei, and Gamers! And she has also served as an assistant director on many other different titles.

For a complete resume of Kristen’s work, you can also check out her Anime News Network page or her iMDB.