I am Milim Nava, the Destroyer!

I know it’s been a while since my last update. (Seriously, it’s easier to just keep on with me on Twitter.) I have lots of wonderful news to post about. I’ve added several conventions to my schedule for this year, adapted the scripts for all kinds of different anime, and been cast as several amazing characters. But the announcement I’m most excited for at the moment is that I’m honored to be providing the English voice for Milim Nava in the popular anime, “That Time I Got Reincarnated As A Slime”! New episodes air every Monday on Funimation Now. This also happens to be a show I’m adapting the English scripts for, and it has been such a fun show to be a part of. If you like fantasy sprinkled with a little bit of comedy and some awesome action, then this just might be the show for you! I hope you’ll check it out. ^_^ 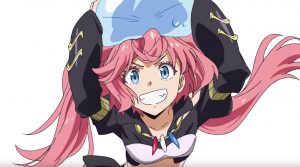 Milim Nava from “That Time I Got Reincarnated as a Slime”